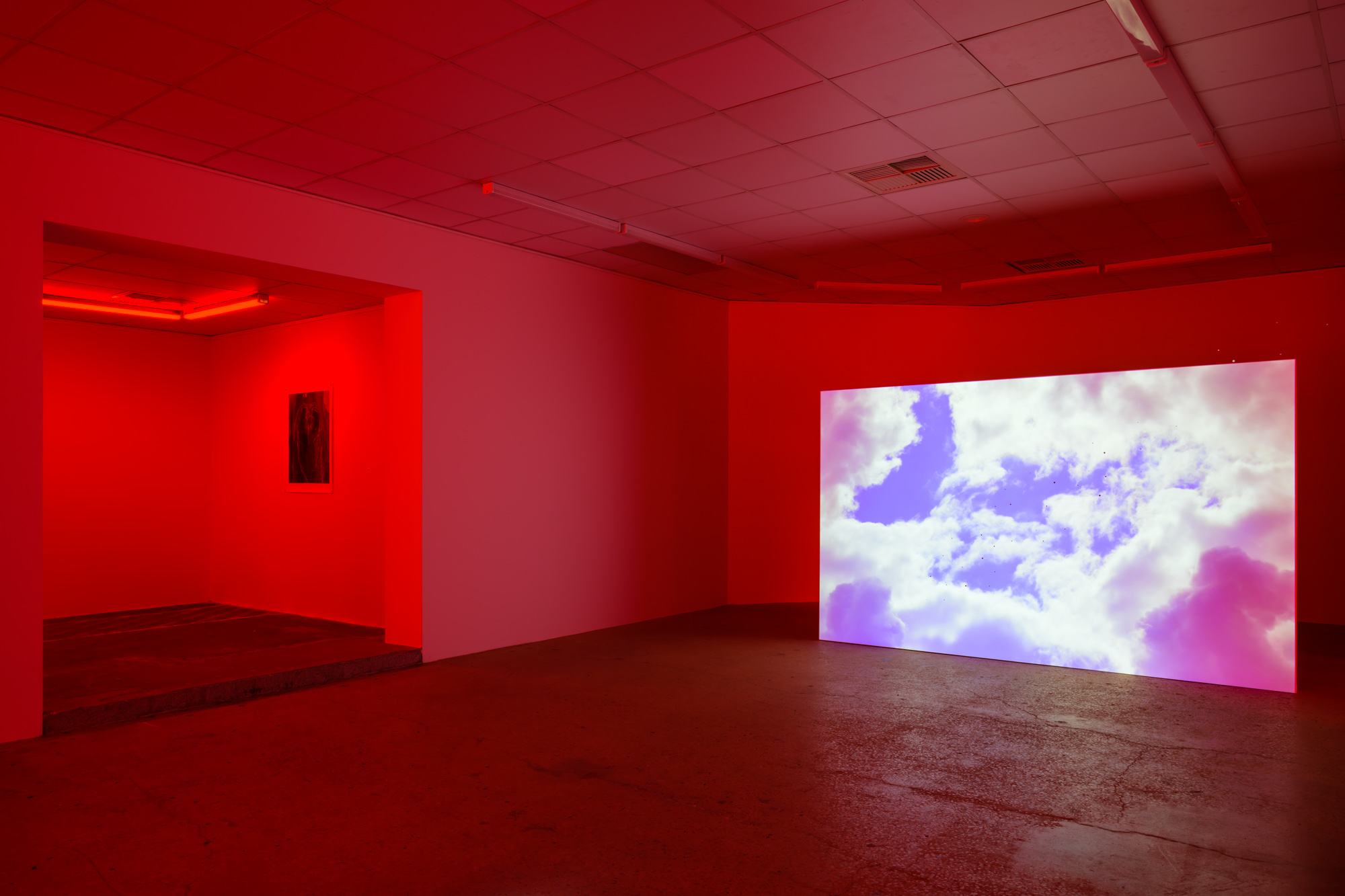 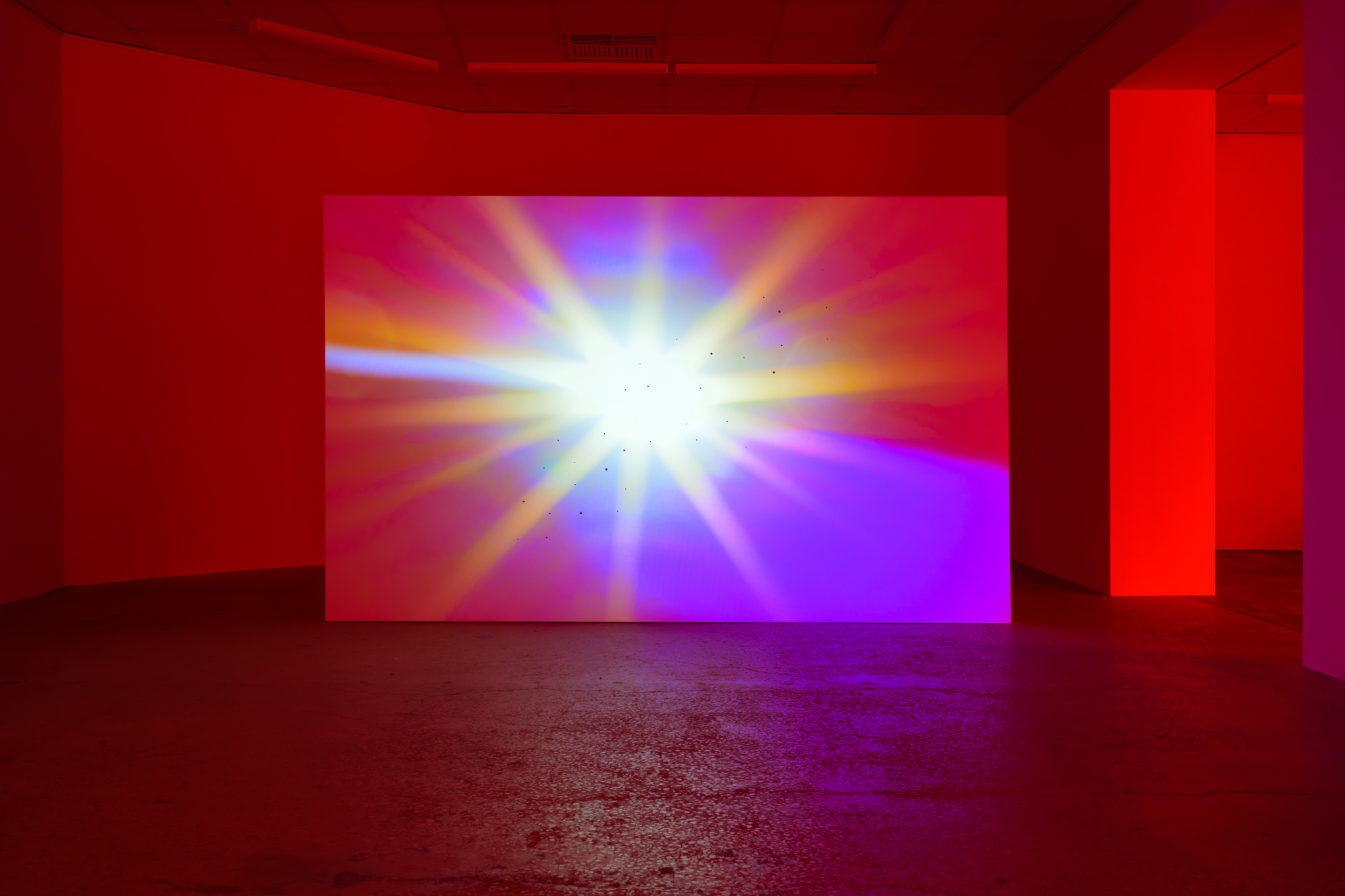 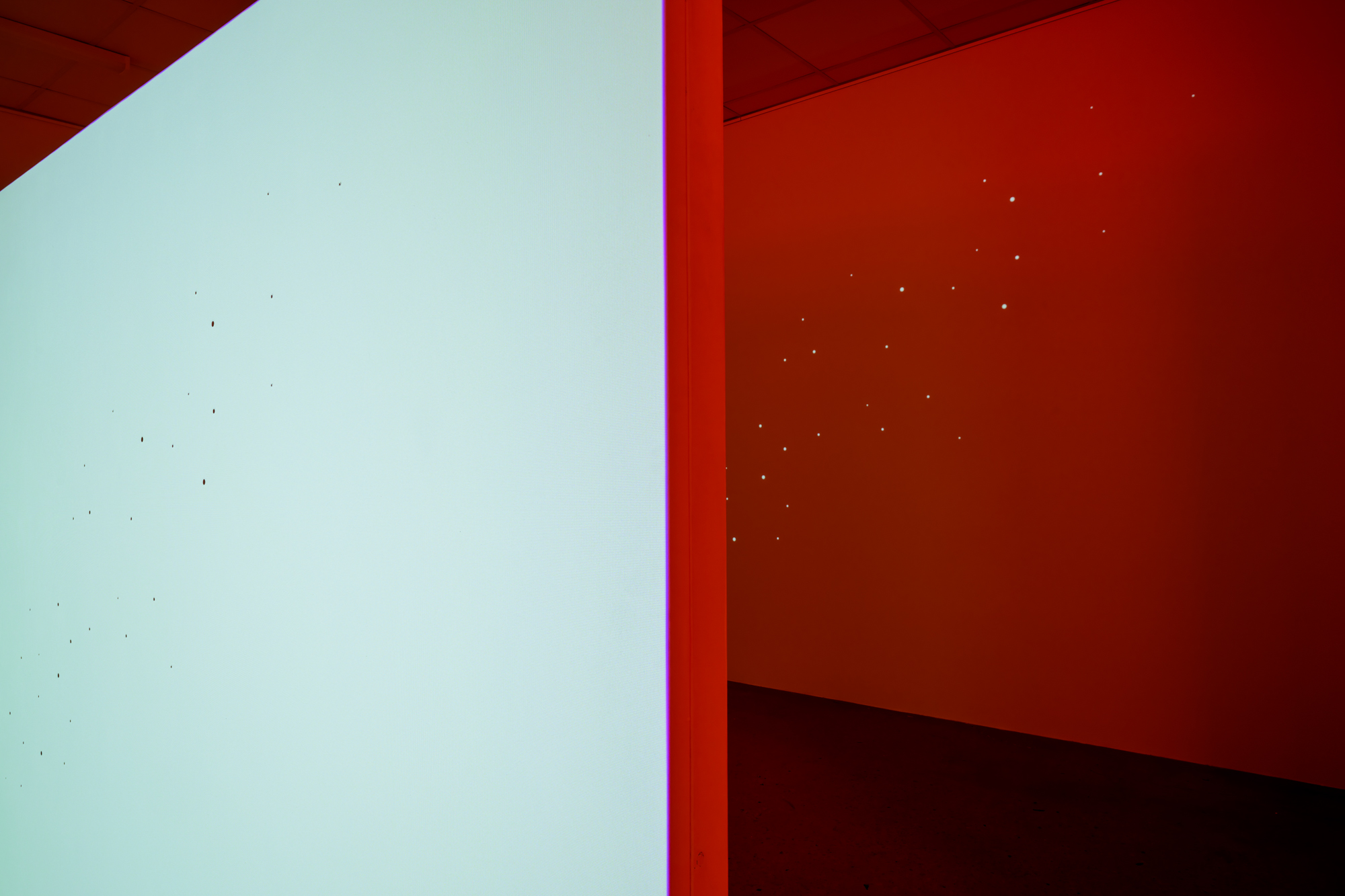 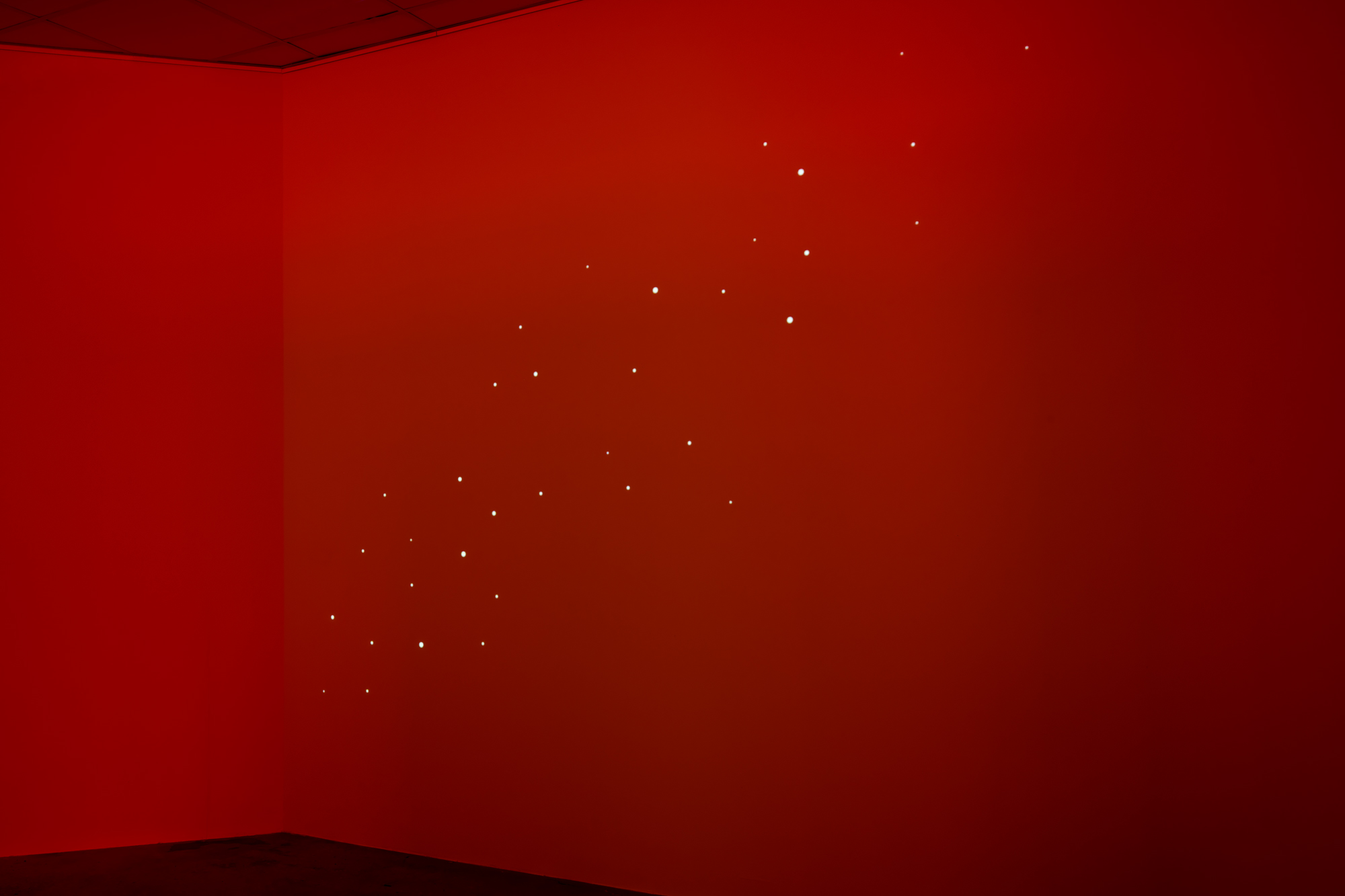 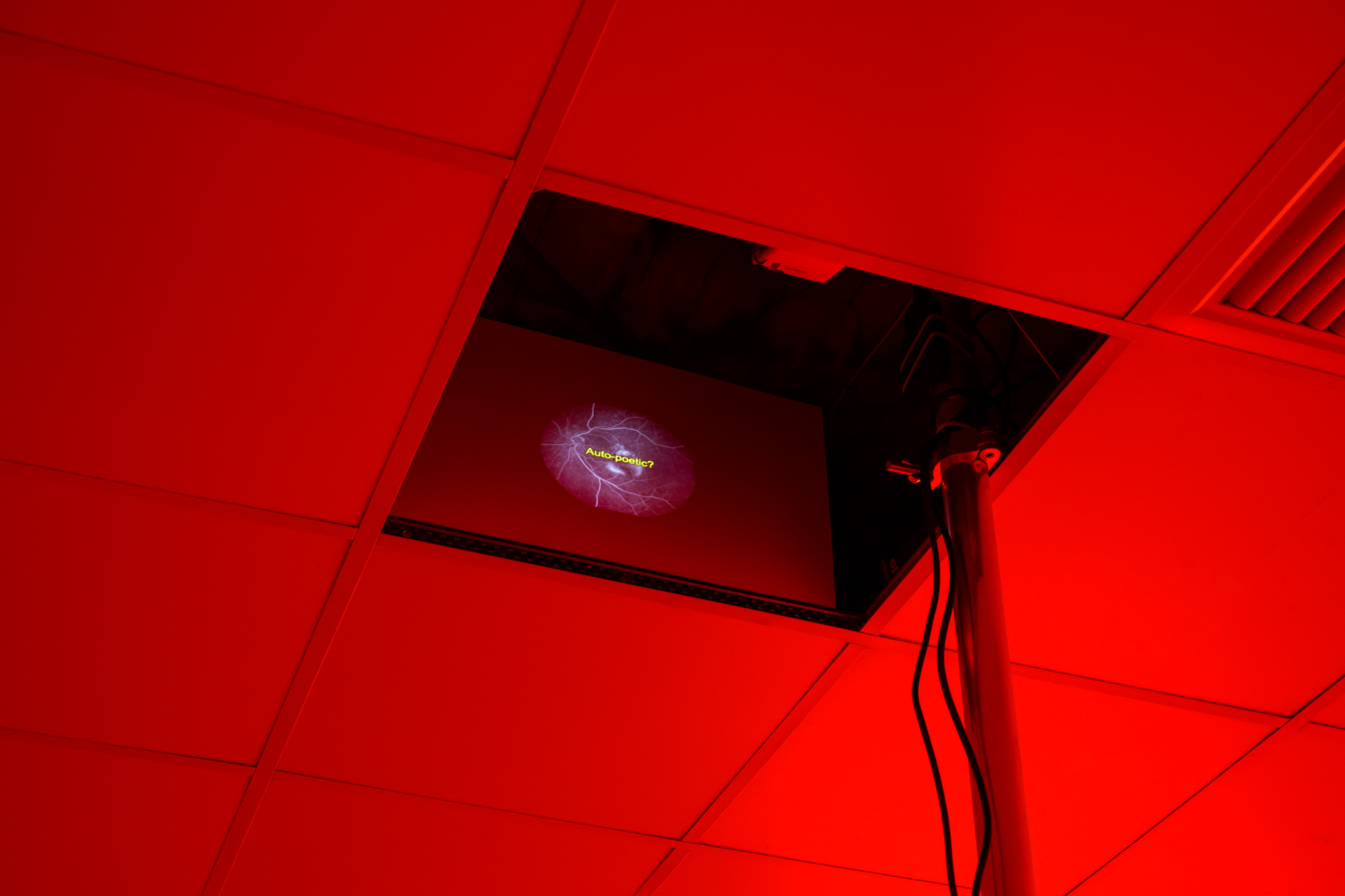 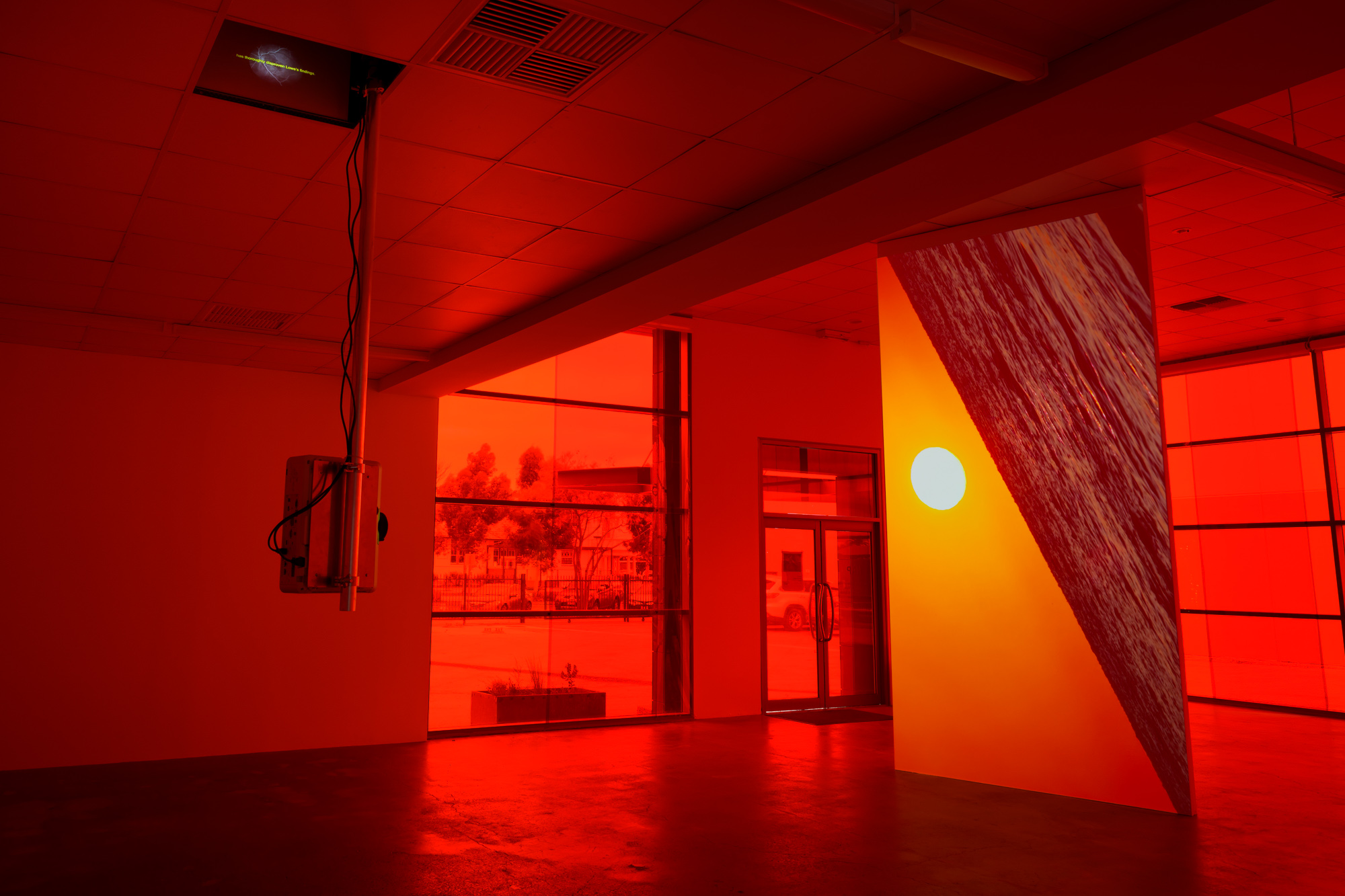 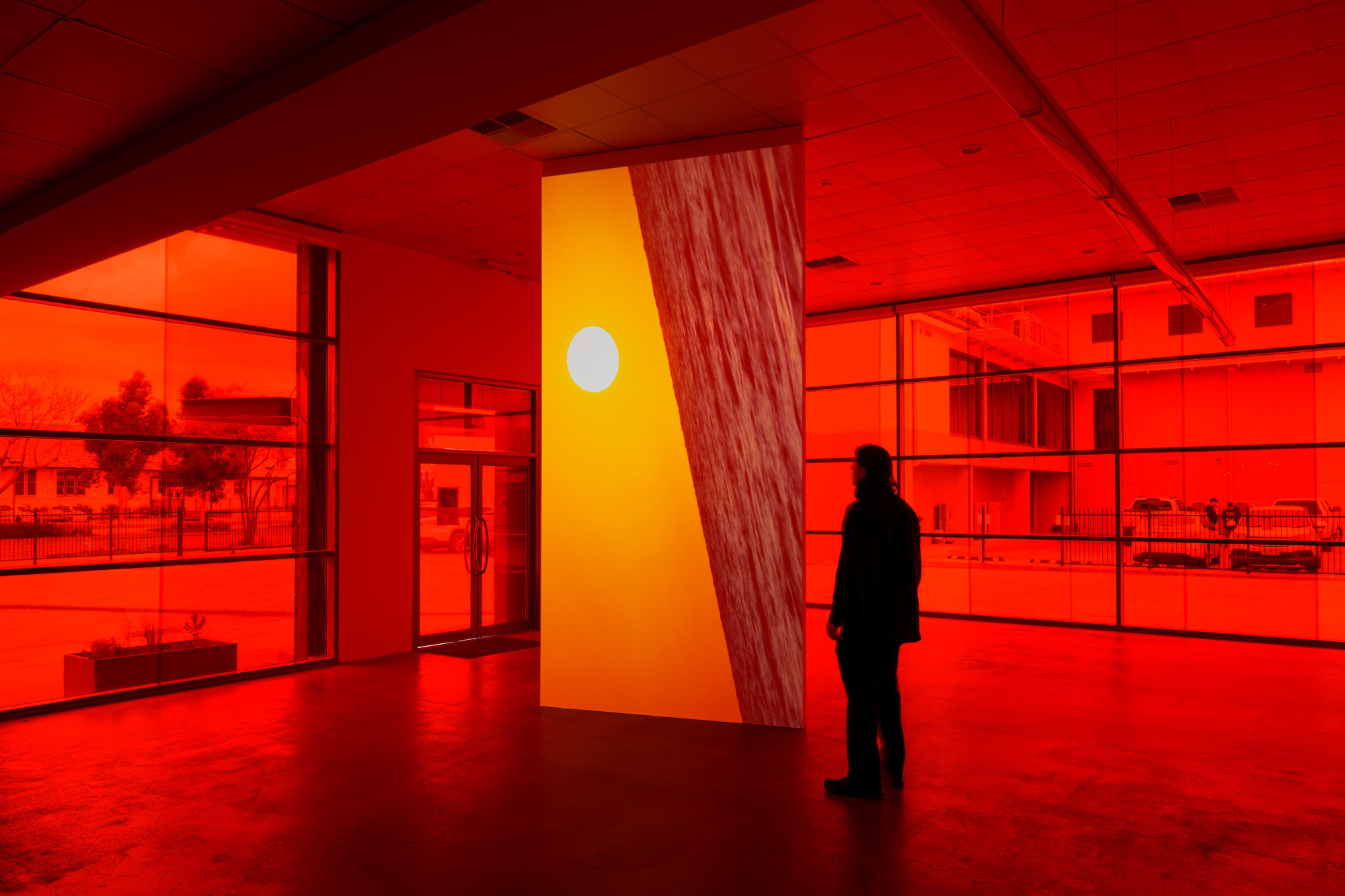 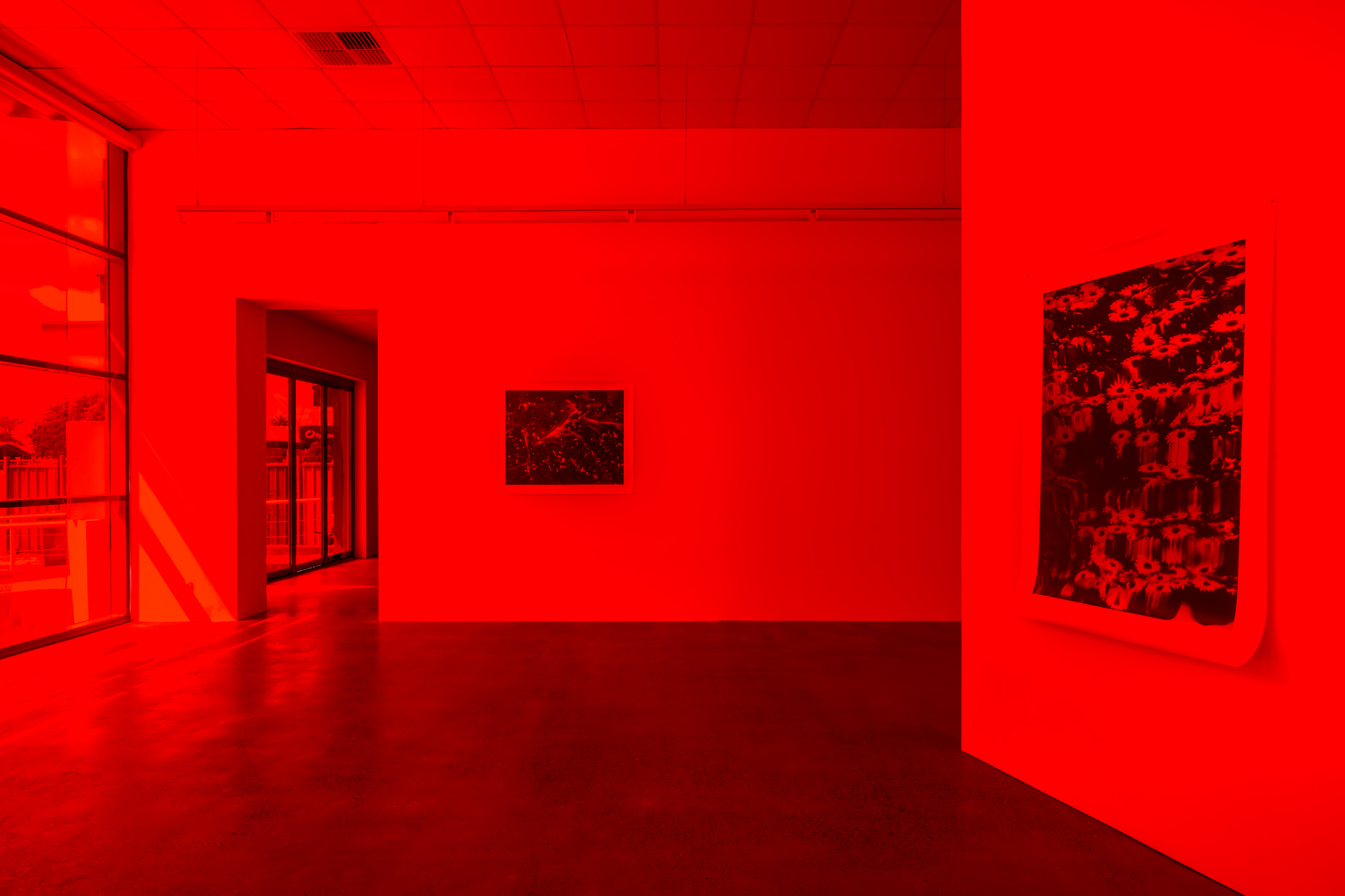 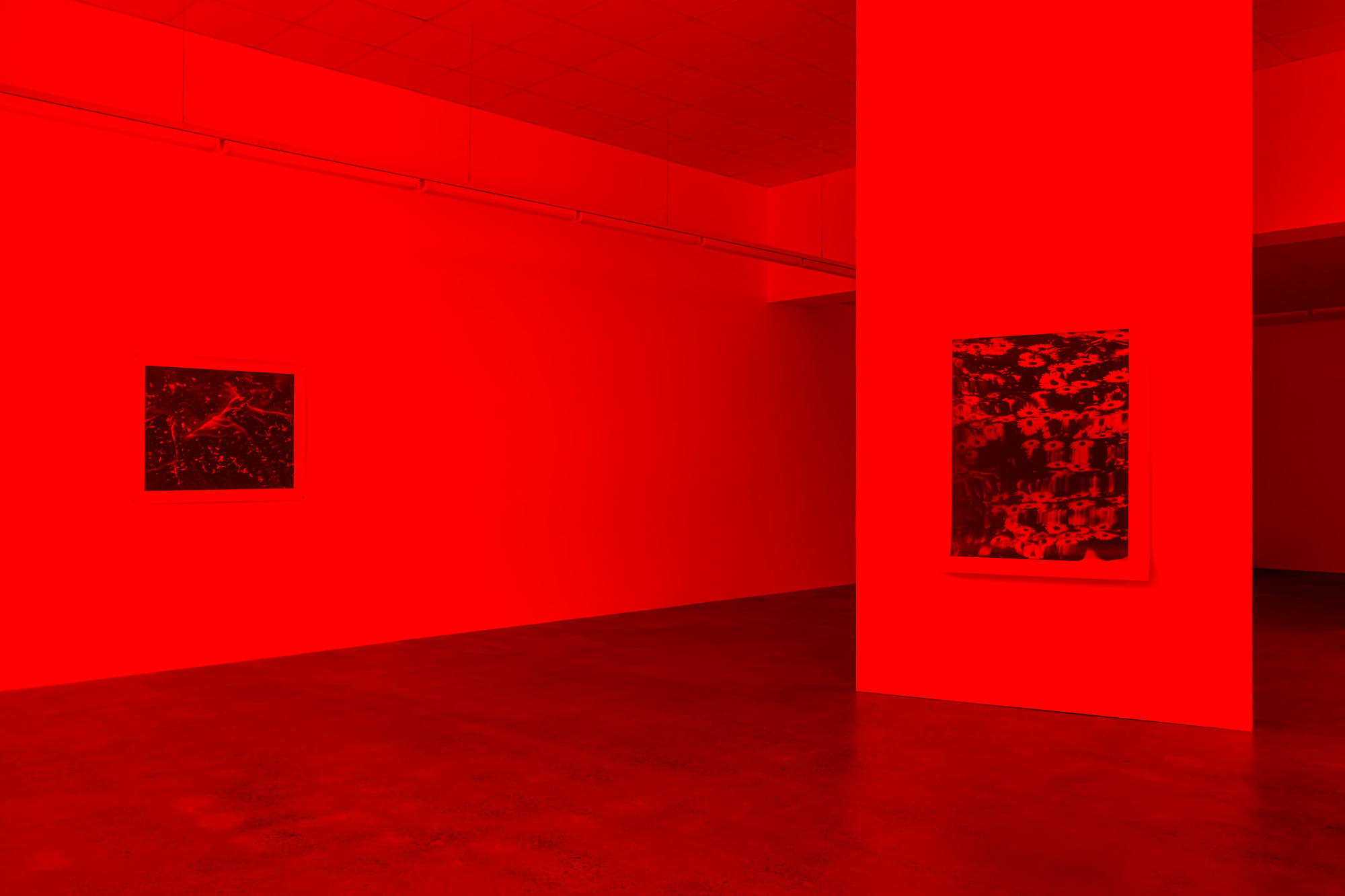 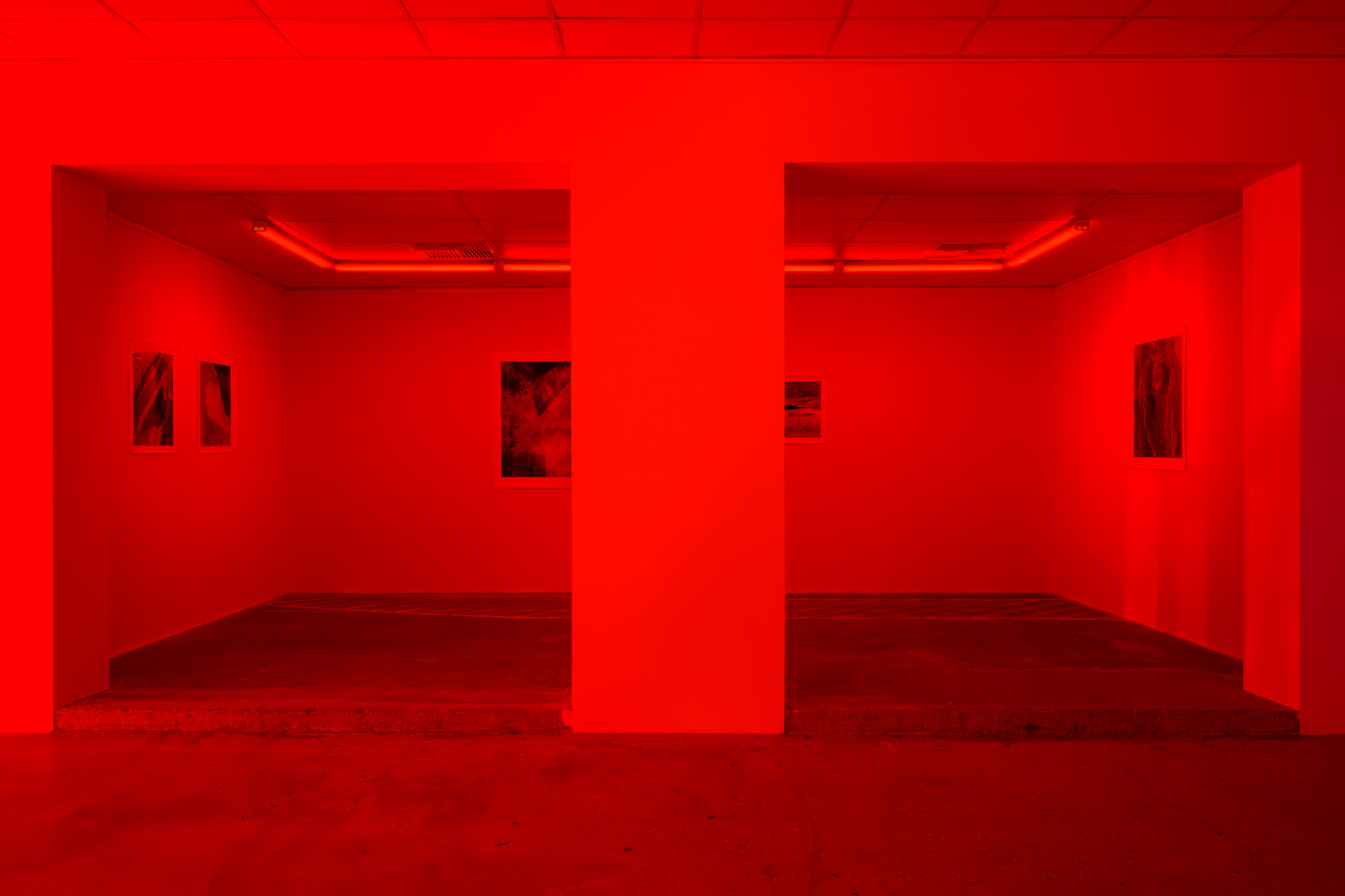 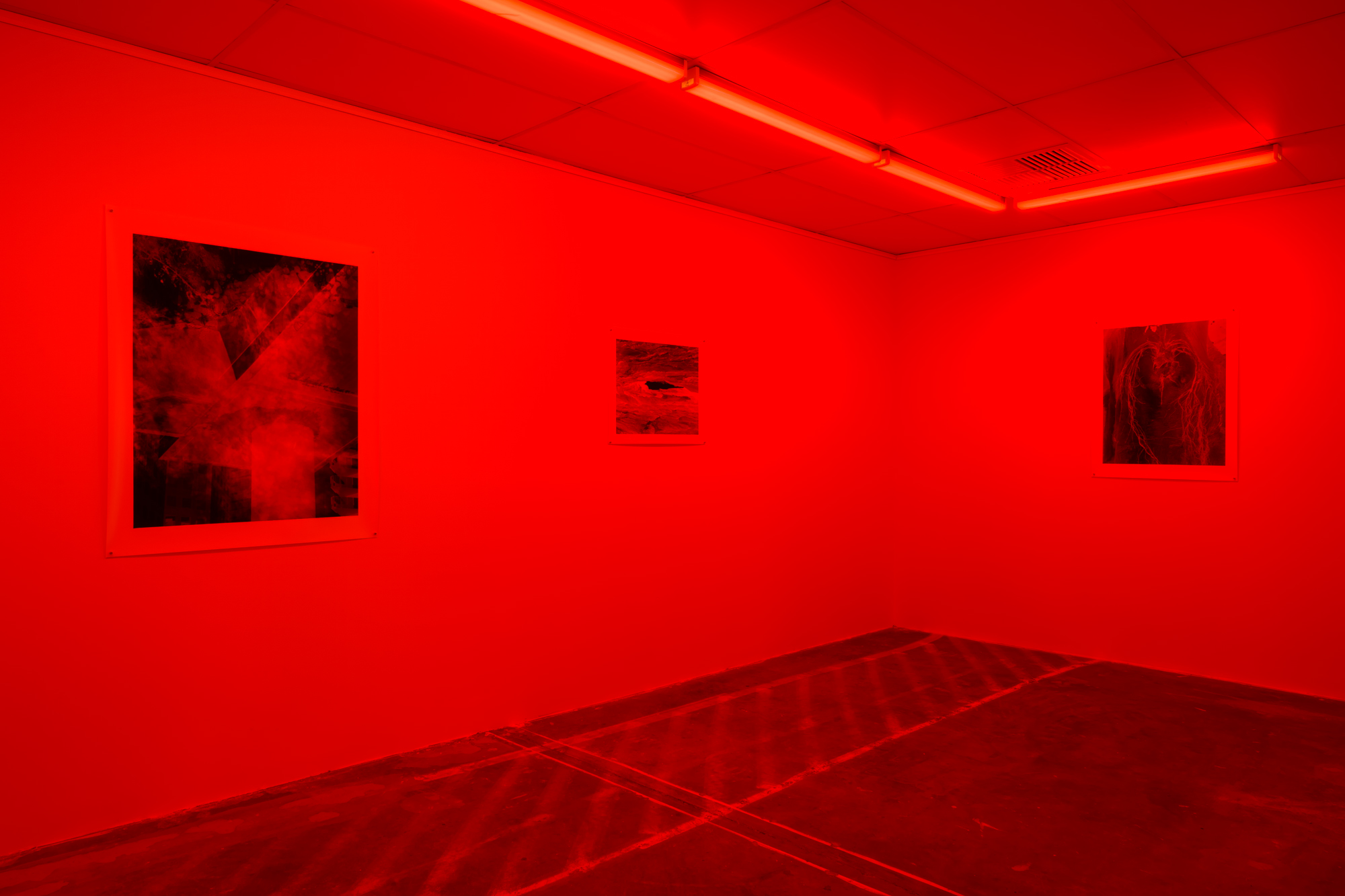 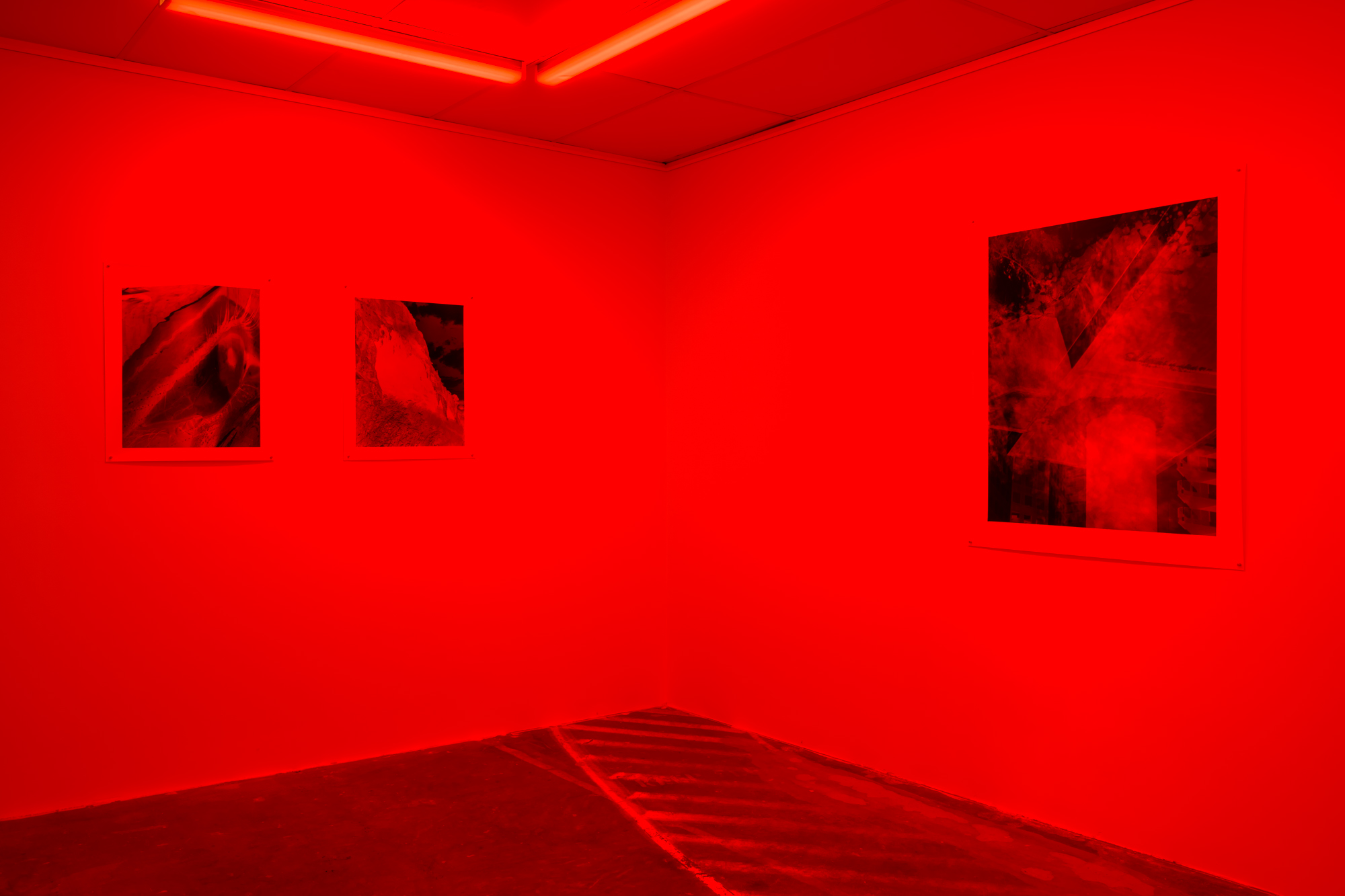 Firmament spans three gallery spaces highlighting Rees’s interest in photography and vision  as a phenomenological experience that can be both literally affected, and also act as metaphoric narrative vehicle.

In the monumental projection work, Horizon, the most powerful forces of sun, water and air are abstracted in a large projection of an ‘idyllic’ sunset. The horizontal plane shifts and with it the sun seemingly crashes or sinks, gravity is subverted, during the process of which the viewer is decentered from human centric perspective, triggering sensation in the body whilst also hinting at climatic catastrophe. This reveals perception as a device that we not only use to orientate ourselves in the world, but also to locate ourselves.

We touch the sun, stars and everywhere at once,’ explores the artist’s personal discovery of eye floaters (entoptic phenomena) when they were a child, eye floaters are thought of as a prism through which we witness our own mortality.
A map of our own personal biological constellations at the back of our eyes, as we look far away, we simultaneously look deep within.

Life on mars,  a hidden projection in the ceiling of the gallery, tells the story of astronomer Percival Lowe. Lowe spent many years mapping what he believed to be canal’s on mars, posthumously no canal’s have been found on mars, and it is speculated that Lowe was simply mapping his own optic nerves.

The large gallery windows throughout NAP contemporary are covered with photographic gel’s, immersing the space in a red spectrum of light, affecting the vision of the viewer. This illustrates the effect on the human eye, which “white balances,” once you leave the gallery or encounter daylight.

Completing the installation is a suite of handprinted darkroom photographs from the SleepWalker series. Rees views photographic film as having an analogous relationship to altered states of consciousness or altered states of seeing. Images plucked from memories, leaving chemical traces of the world of appearances, which passes by like a ghostly apparition. Mental images that appear in one’s head when drifting into sleep (the hypnagogic state) almost appear as if in black and white, or white as foreground and black as background like a film negative, in truth is not so much that we see in black and white during this stage, but rather that there is a distinct lack of colour in the realm of shadows.