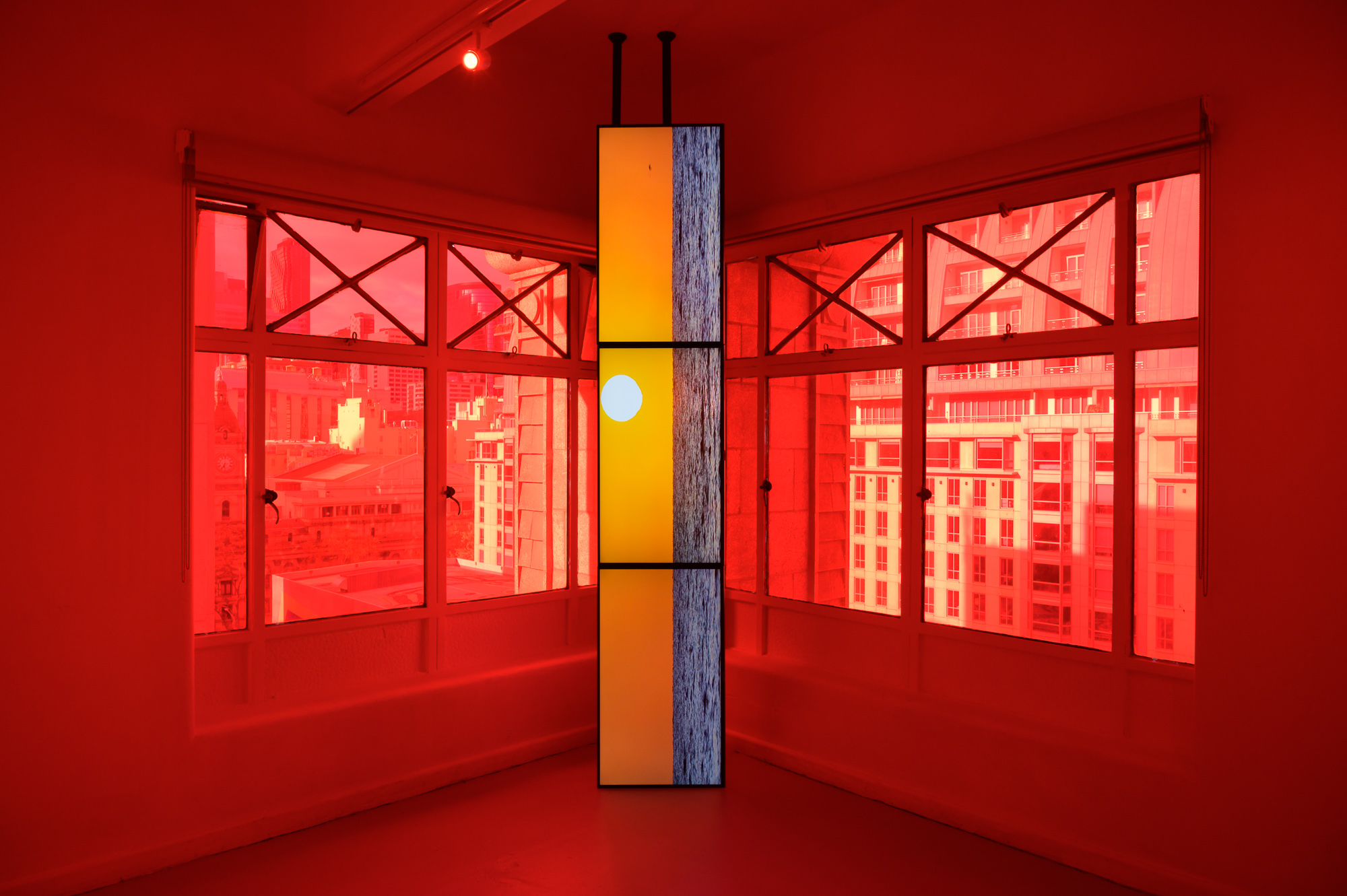 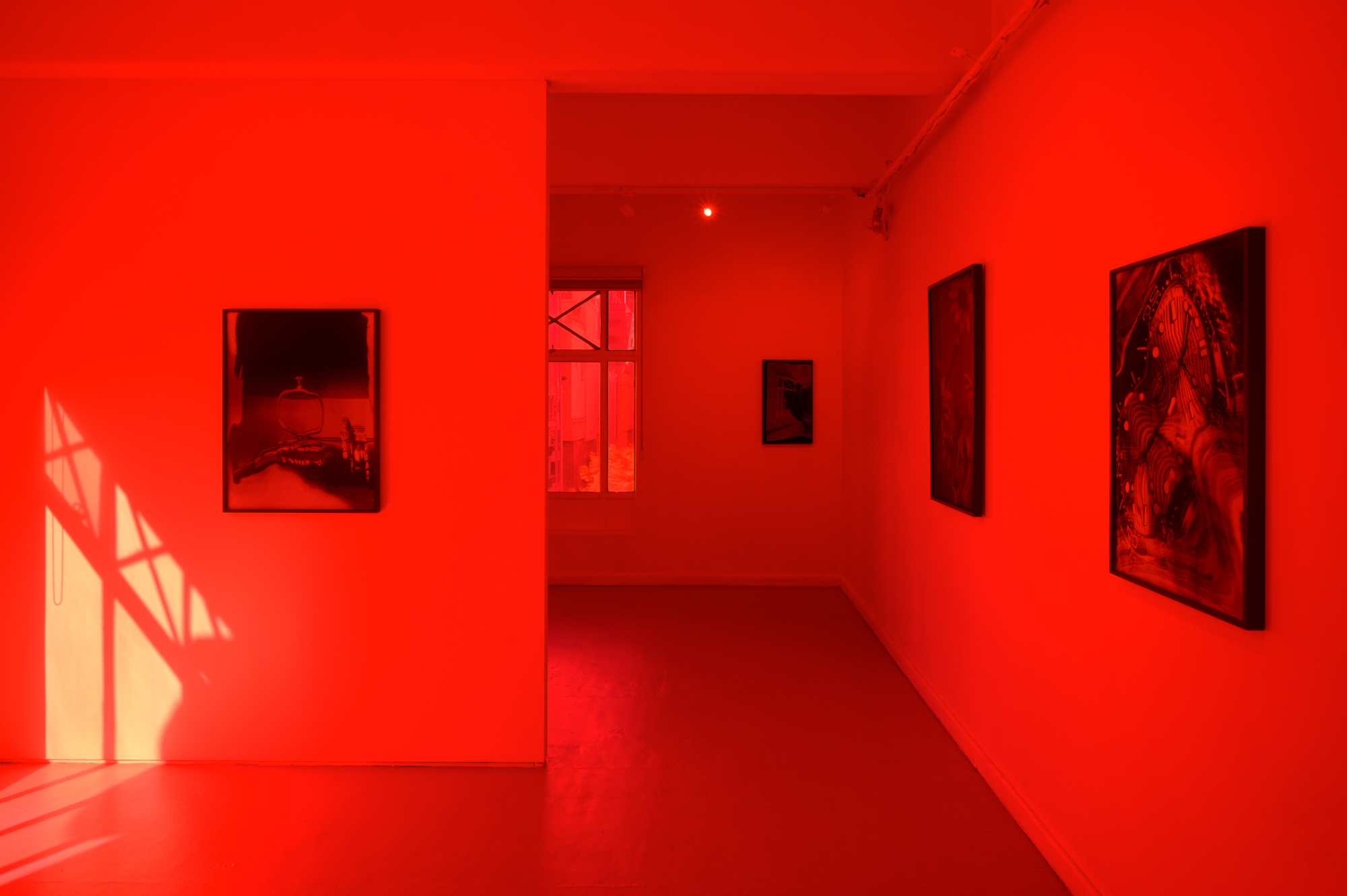 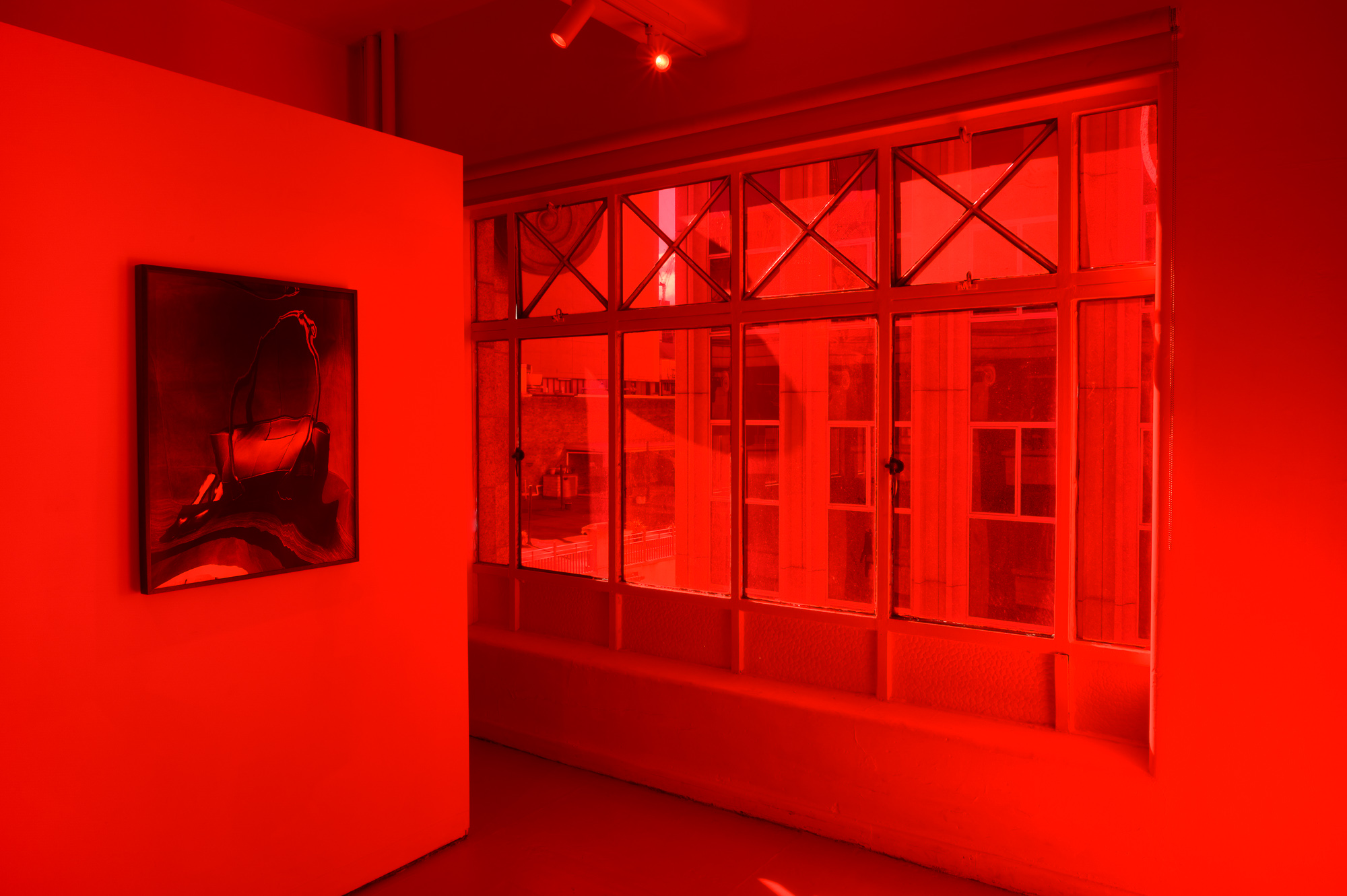 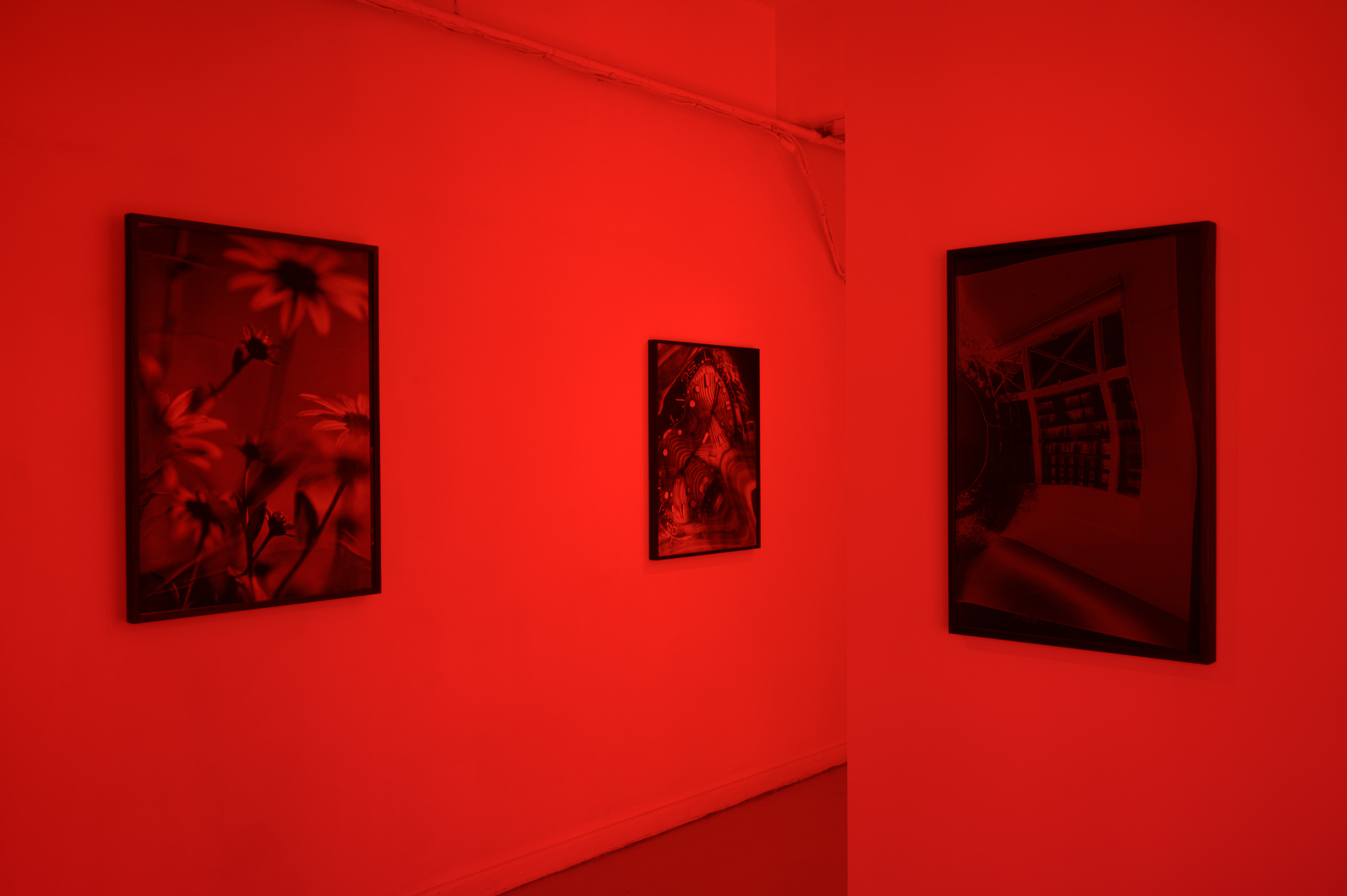 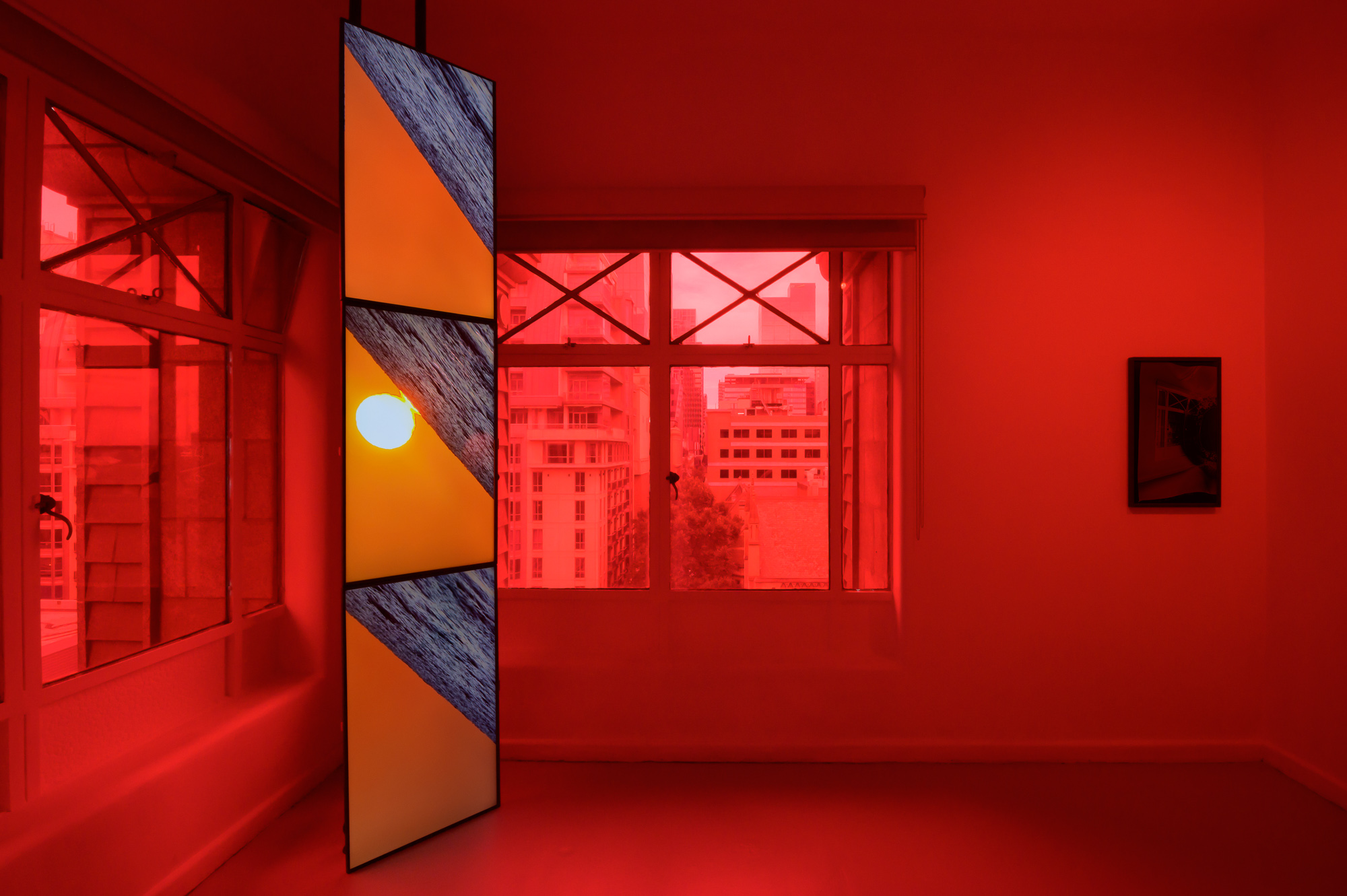 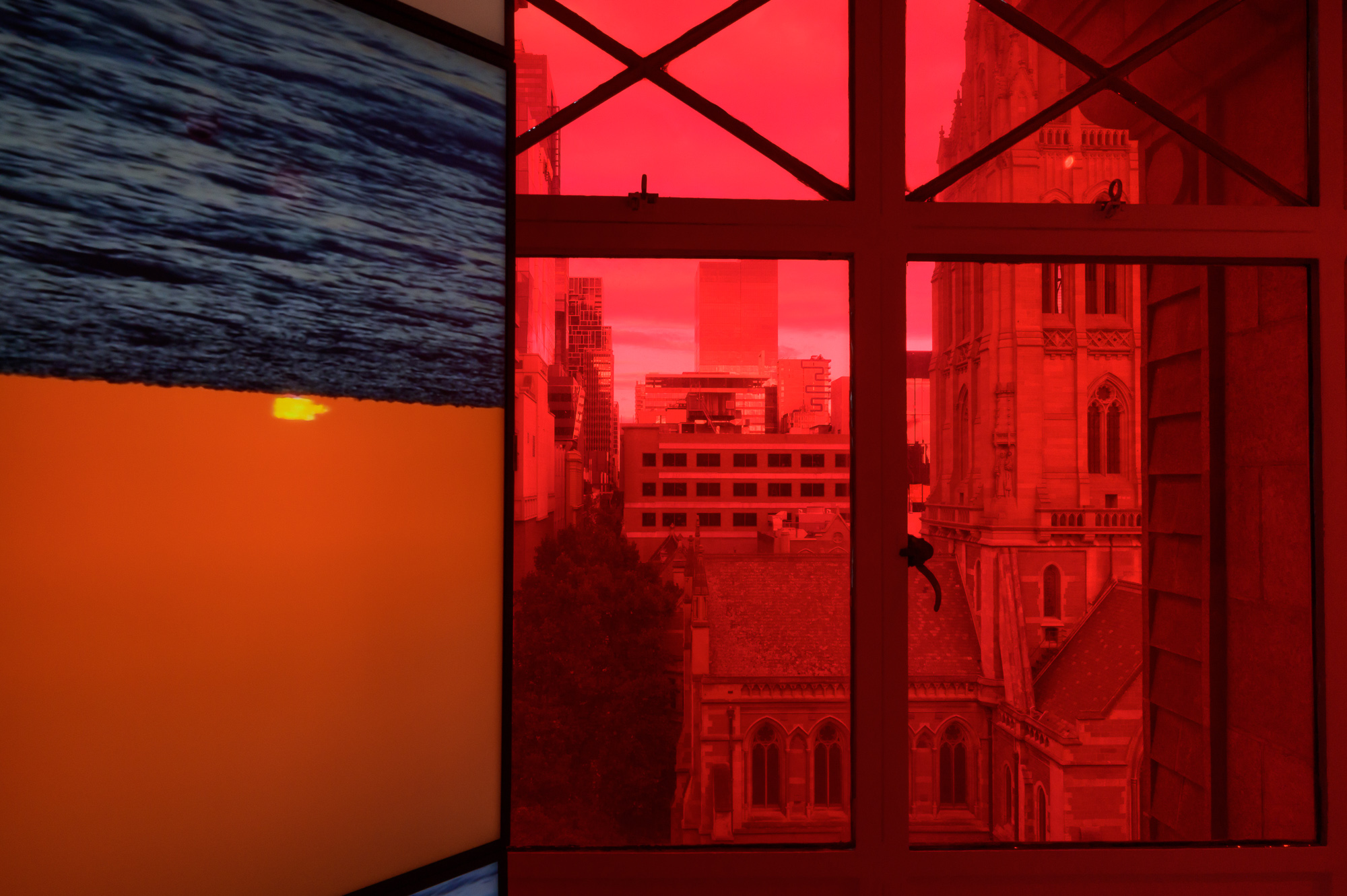 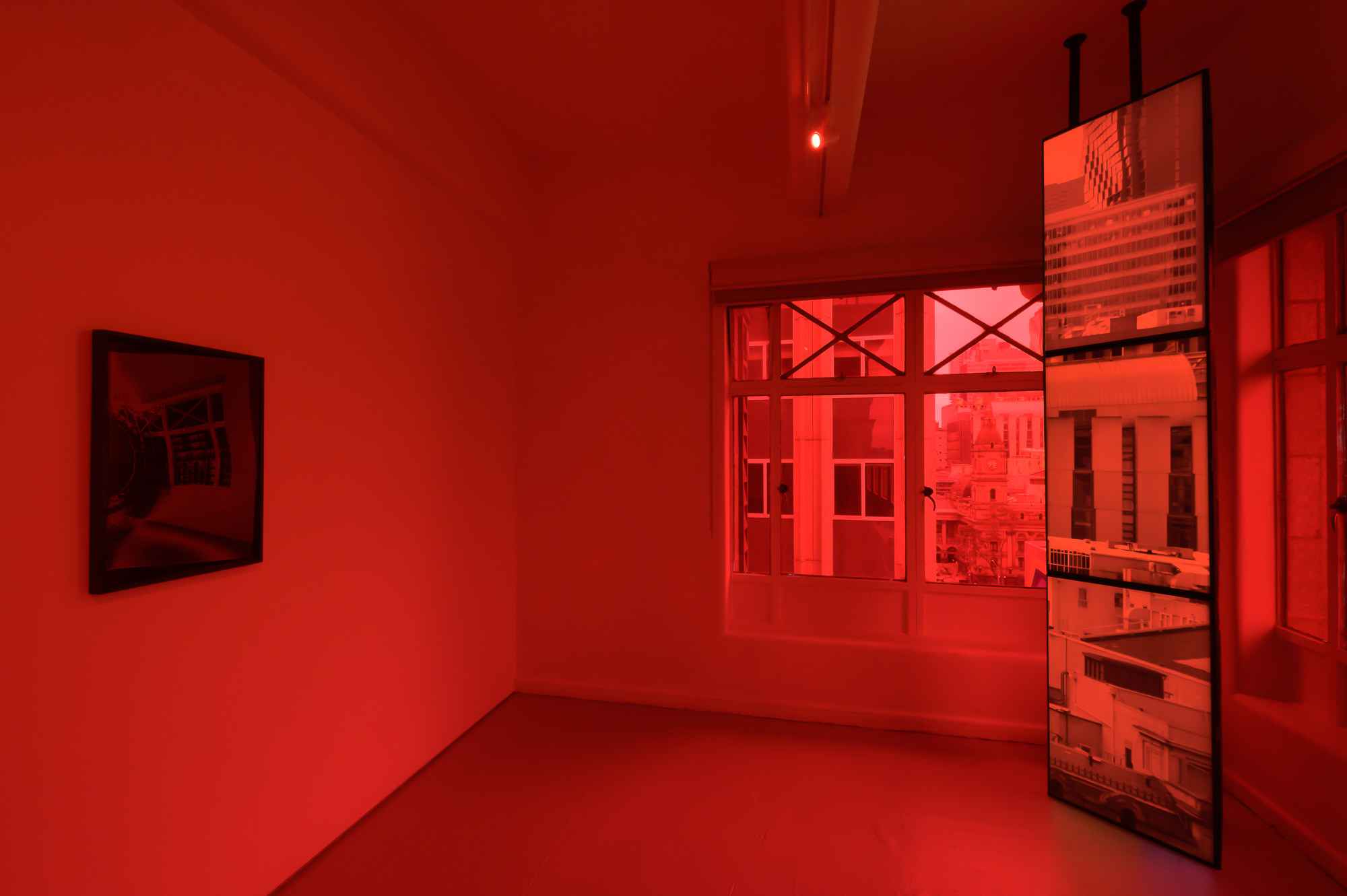 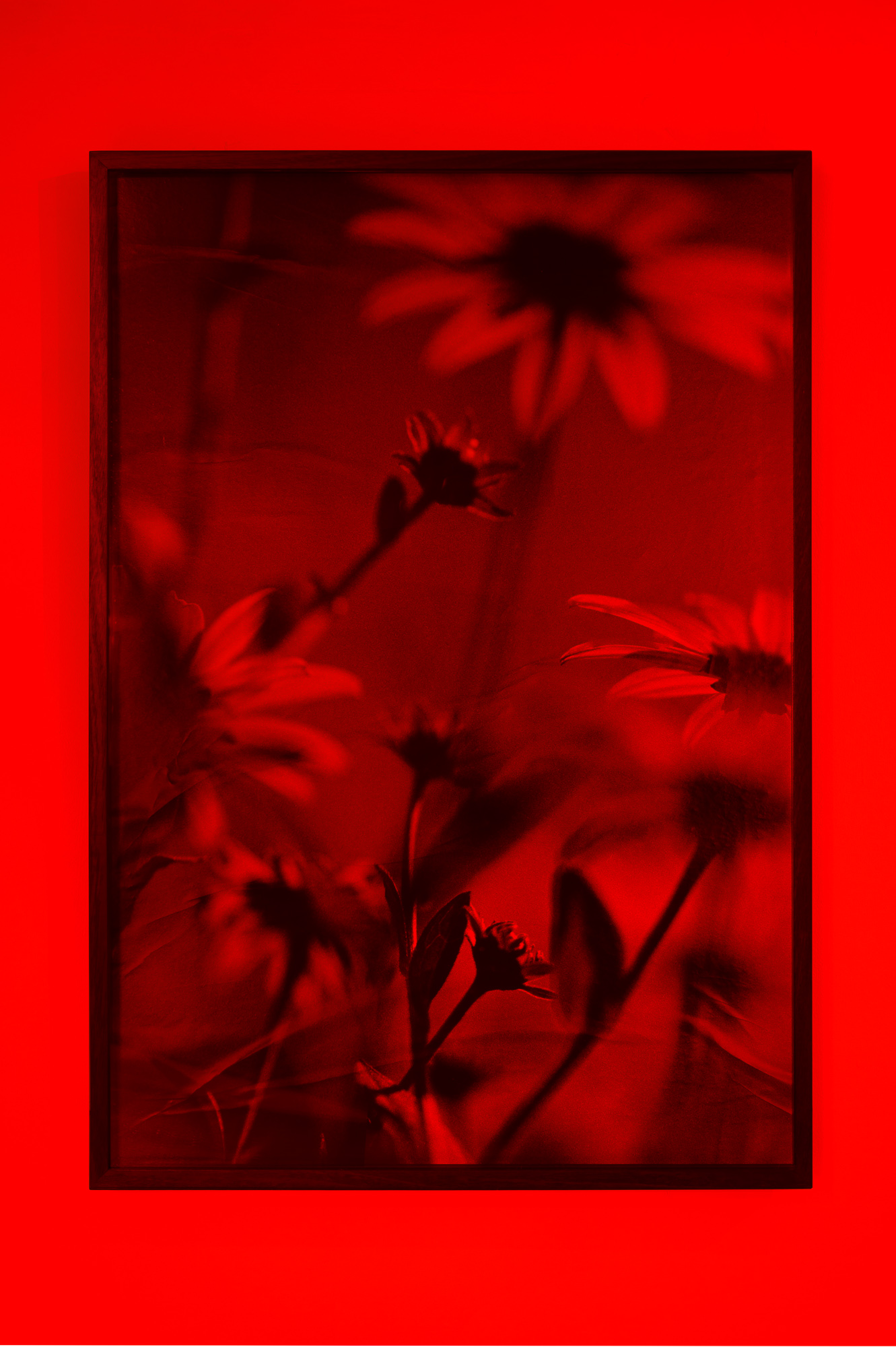 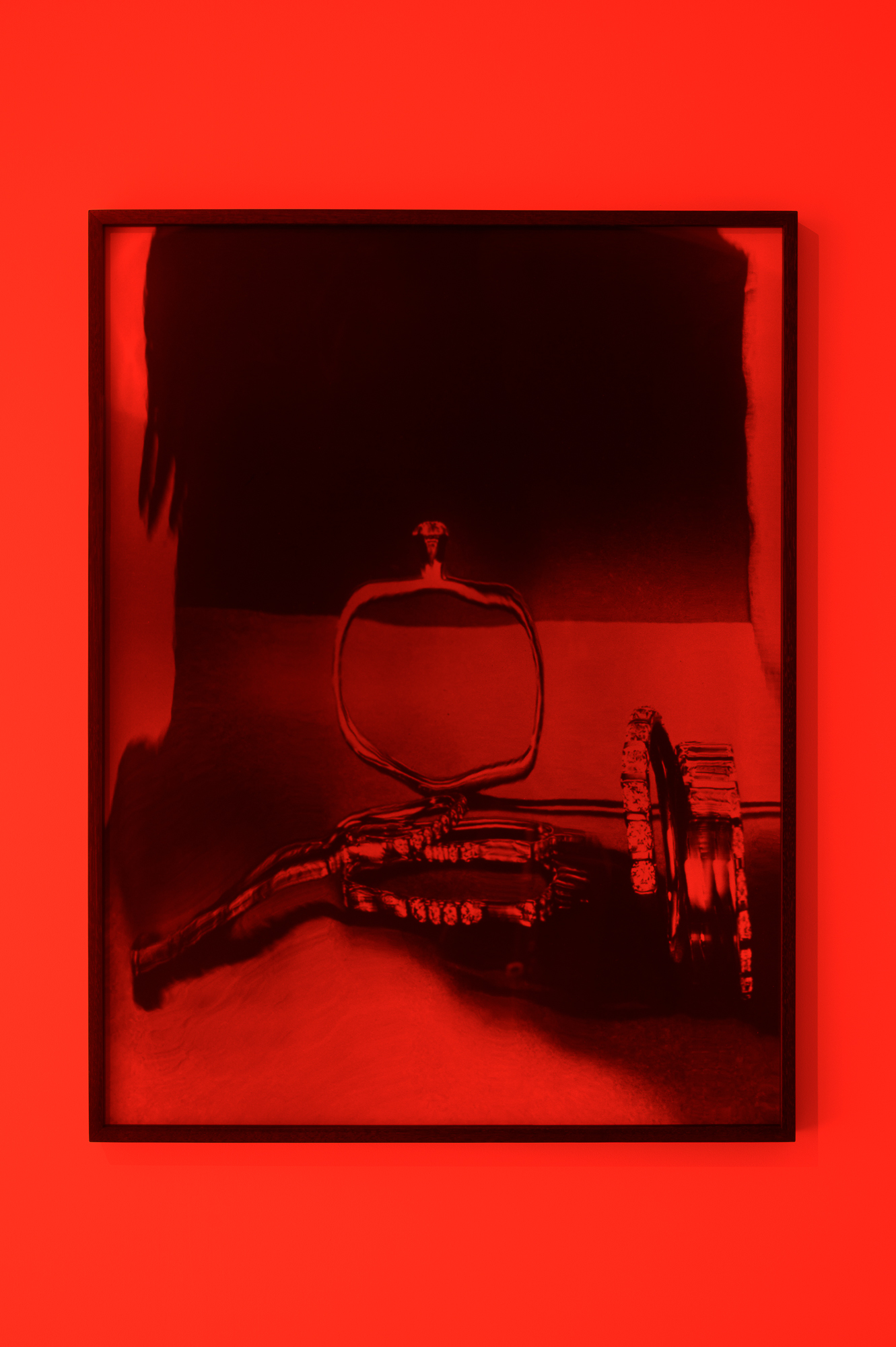 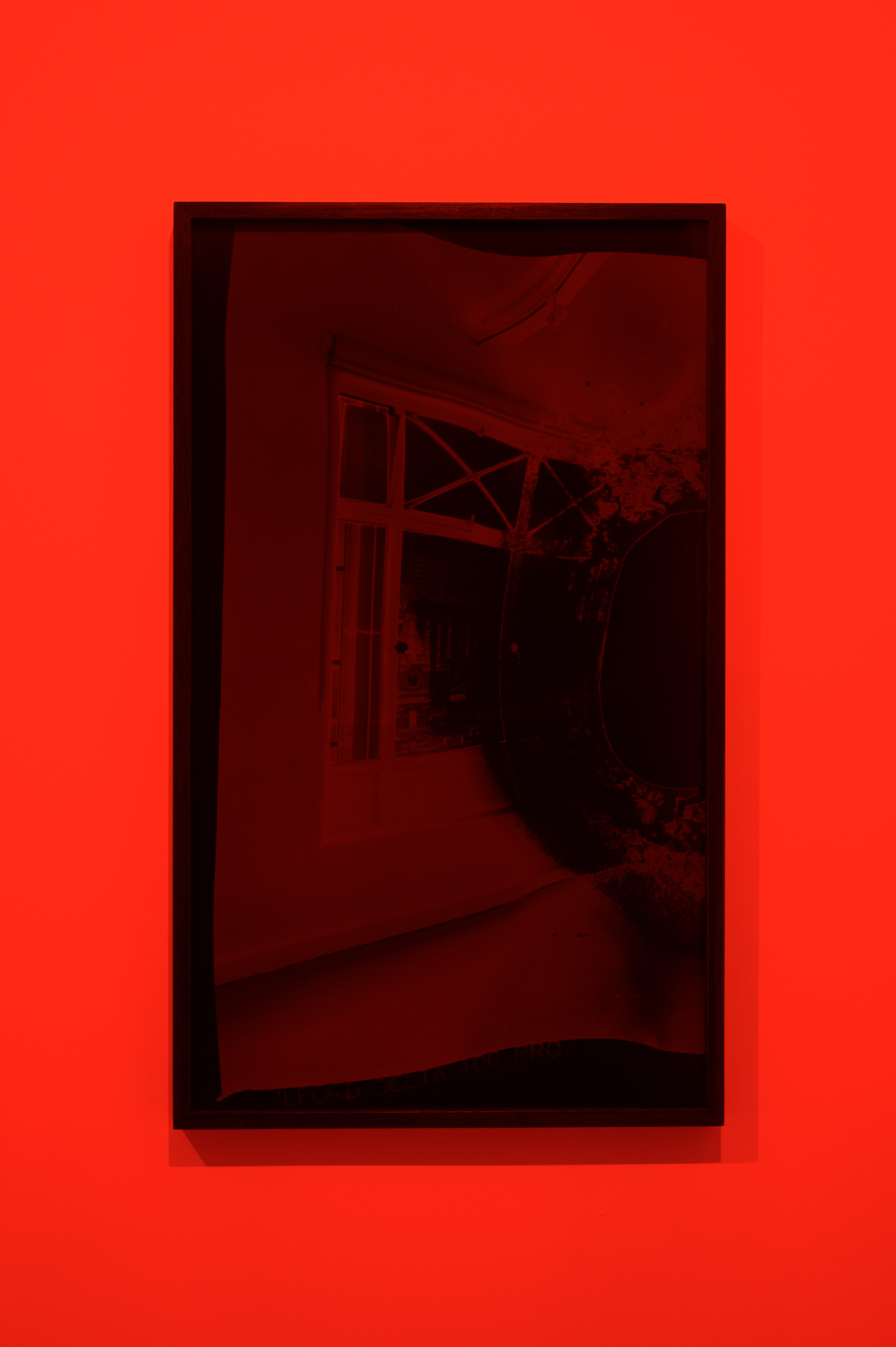 A Horizon is an Untouchable Limit

The sun is a blind pupil sliding around in its vast, shallow-vaulted iris; the sky. Nested oculi align: sun-punctured firmament, a window-lit room, the aperture of a camera.

A horizon is an untouchable limit. More than mere perimeter, the absoluteness of its limitation is constituted by its untouchability. It is also a pictorial key that maps the two-dimensional plane of representation onto the presented world of experience. As both limit and orientation of the visible, the horizon discloses the region of sensory perception, of embodiment, and also suggests a beyond that remains concealed behind it. The eye clings to the exteriority of things in vision but it desires penetration, unification, an intimacy with essence. The apocalypse tempts with the thought that the world of appearances will be catastrophically vitiated to reveal the font of the Real behind it. In Aaron’s work, the red tinted windows of the gallery space collapse together the connotations of a photographic darkroom and the imminent torrid doom of the planet brought about by the desecrating exhalations of human industry. ‘Reality’ possesses us with a millenarian fervour that compels the eye to seek out that which is entirely unmediated. This is the attraction of apocalyptic aesthetics.

Like heliotropic flowers, eyeballs bend on optic nerve stems to meet the gaze of the sun, the sun that is both grand model of the eye with earth-as-retina, and incandescent author of vision’s possibility.

Photography is a physics experiment that produces semiosis. In its indisputable mutuality with the light issuing off its subject, the photograph really does harbour some radical contact with reality. This contact, however, is always totally simultaneous with semiotic content. Impossible to separate the contingent and the constant, this is the paradox that makes photography compelling. Aaron’s photographs of luxury consumer goods are as though from a submerged shopping centre, or the bottom of a basin of super viscous developing fluid, or of radiating nuclear waste immersed in a tailings dam. It’s like these images have been captured at the midpoint of some aqueous process to cut the seductive emanations of signification and precipitate out a residuum of uncontaminated actuality.

Aaron’s video work images the distilled elements of climate catastrophe: air, sun, water. Invisibly, this organic trinity conspires to annul the pact issued under the sign of the rainbow; the pact that ensures the enduring solidity of the earth of Earth. The Flood will return: not as condign divine censure for the wickedness of Capitalism, but the product of dispassionate terrestrial mechanics. Capital manufactures, in fact, a perfectly doctrinal cataclysm. In the Biblical flood, the fountains of the deep are unstopped as well as clouds gathered in preparation for the deluge. Presently we witness seas rising to inundate shorelines as if filled from below. Freak storms gestate over the too-warm oceans then migrate over land and pour down, filling all the hollow and low-lying topographies. Land is a wafer supplied as realm under the feet of humans, the earth a biscuit wedged between the twin lens-like basins of sky and sea. When God wants to obliterate humanity, he destroys the ground that sustains it from below and above. In Aaron’s video the horizon gradually, dreadfully peels off its horizontality and turns, untethered, in space. It isn’t the exposure of some fundament spatially behind an occluding horizon, but rather it conveys the ahuman scale and spatiality of the globe in constant motion in a non-oriented cosmos. After the annihilation of humanity, the earth will be unmoored from the contingent bearings of perceptual convention. The sun shall reign over an indifferent and meaningless visibility addressed to no agent.

Photographic prints are black and white gelatine silver on fibre based paper.

The gallery changes colour over the course of the day depending on the light spectrum intensity outside the gallery, optimal viewing time is dusk – a rich red. When you enter the gallery space, your eyes will slowly adjust to the red spectrum, the colours will appear to change once you leave the gallery, the fluorescent lighting in the corridor will appear very green and you can slowly detect as your eyes adjust back to normal.