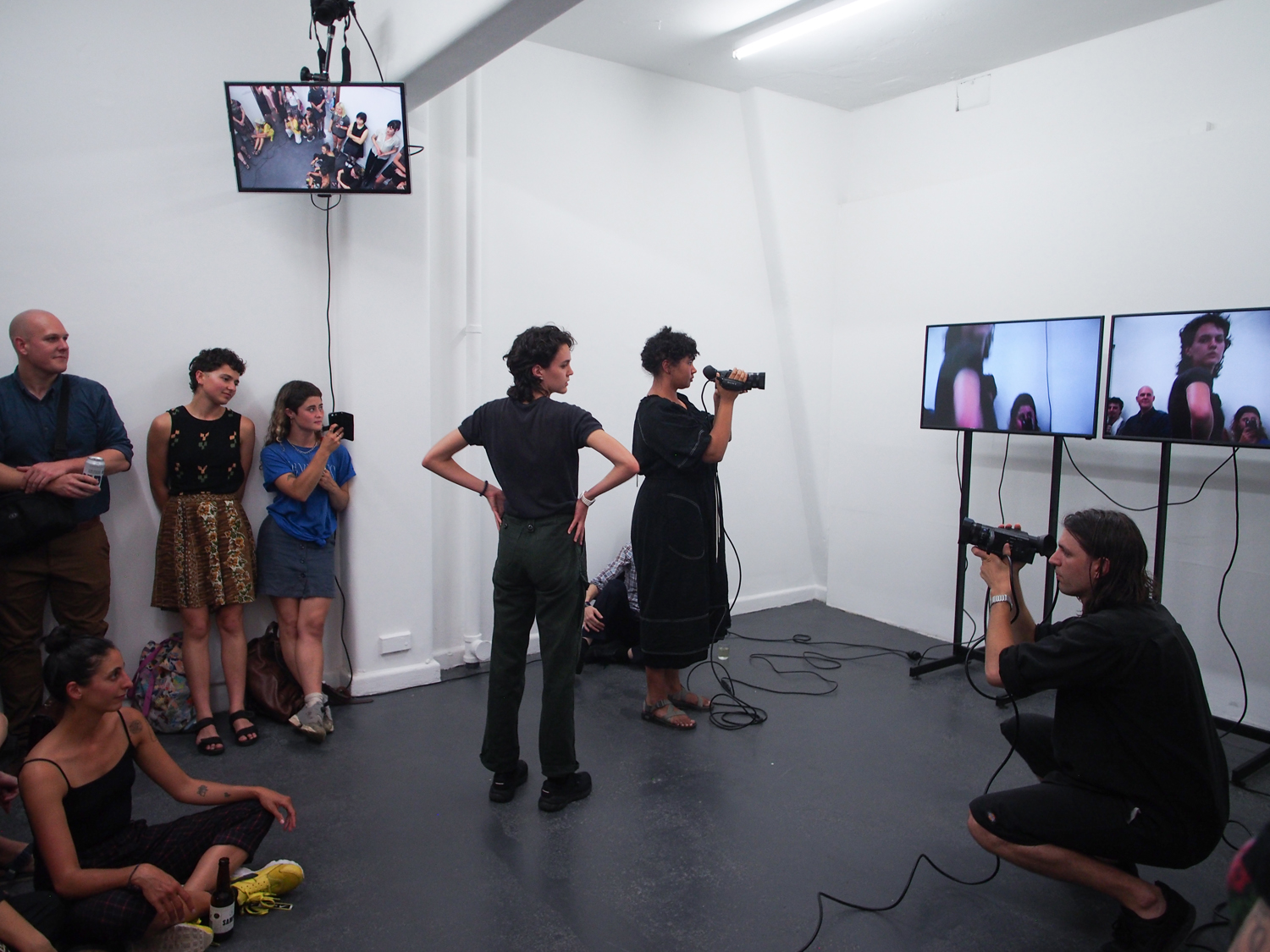 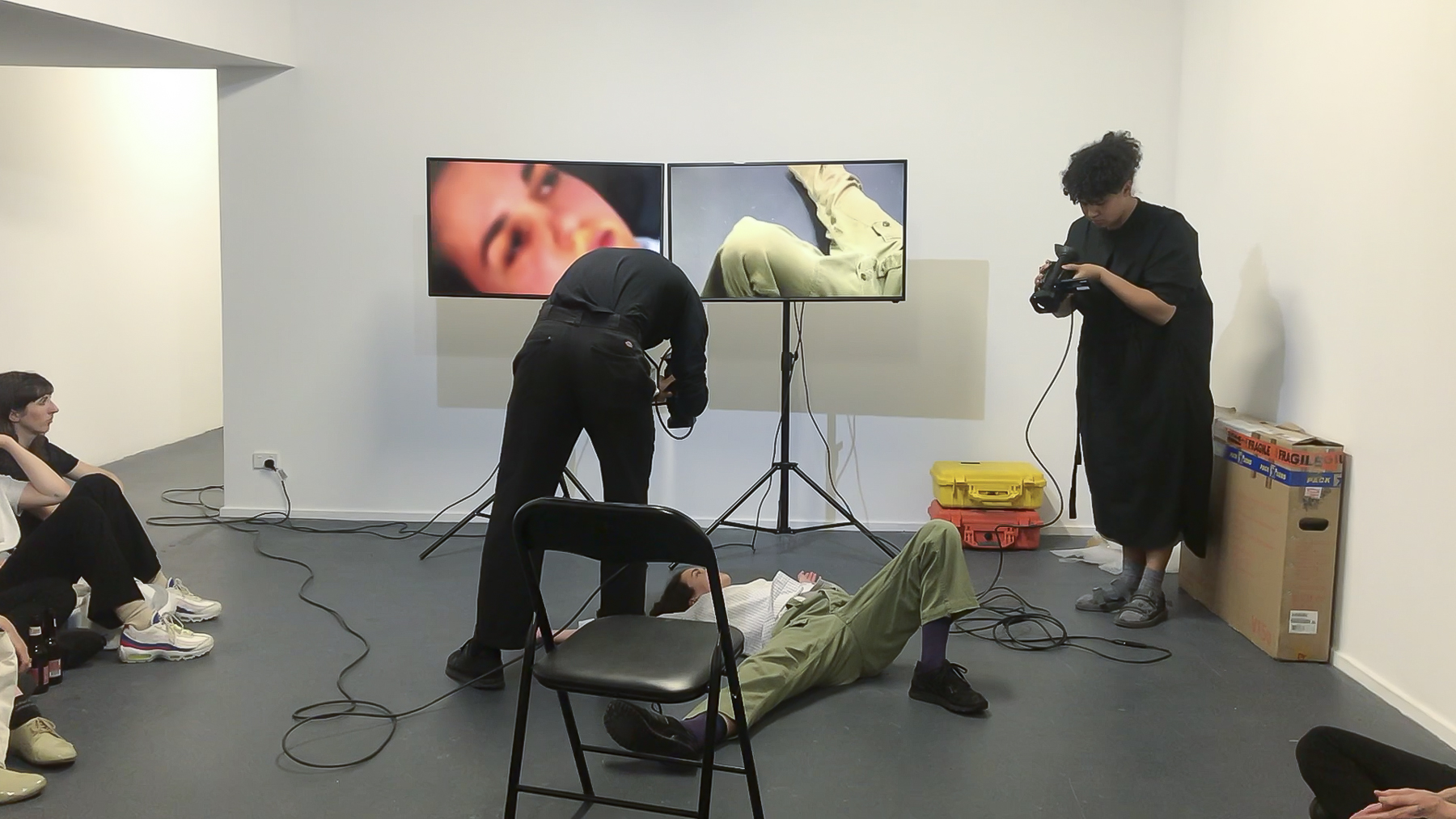 Live Work, explores the affective qualities of the screen and performance’s cohabitation through situational live videography. Turning the gallery into an aperture for the mobile gaze, camera operators become actors and actors become framing devices. Live Work considers the transient nature of experience – individual and collective – and the multiple ways our various experiences are recorded, translated, interpreted, described, fragmented and ultimately visualised through form and material.

Documentation of work by Aaron Christopher Rees and Eliza Tiernan

The Ontology of Body

“Where analog cinema was about the duration of bodies and images, digital video is about the articulation and composition of forces. And where cinema was an art of individuated presences, digital video is an art of what Deleuze calls the dividual: a condition in which identities are continually being decomposed and recomposed, on multiple levels, through the modulation of numerous independent parameters.”

Watching movement, I am struck by how we experience the body. Do we conduct a retinal scan of the whole form in motion? Or do we portion it, experience it limb by limb?

Live Work by Arini Byng and Aaron Christopher Rees poses these and other questions of us as spectators. I first observed their collaboration during a performance at Kings ARI – Two cameras and their operators (Aaron and Arini) record at different paces, with unique vantages the movements of a performer who interacts with the space in between and around the cameras. The performer gestures and twists between these two lenses.

Here are some things I noticed:

Their collaborative work knits together the modalities of cameraperson, surveillance and performance/dance.

The screen must lag behind the body – it cannot capture every sudden movement, and is limited in its scale to zoom and pan – linearities that are not echoed in the body, which can writhe and bend, twist and jolt outside the cropped frame.

The cameraperson is an active agent, distilling down the duplicate image to its essential intimacy (the close up).

Witnessed through two screens, these vantages at times converge, and we experience the frame in triplicate.

It becomes less about the body in space and more about the frame and then the framed frame within that.

The body is disembodied by the camera, by its focus and close attention.

There is a dichotomy between witnessing the performance as a transient time-based experience, and instead focusing on the screen-captures, which curate the performance in different ways.

With bodies in the space, the dual screens, and the question of where to focus, which screen do we look at now?

In an age of surveillance, the multiplicity of screens is a lived existence. We actively choose to multiscreen, a handheld device to thumb through while ‘watching’ on a laptop or larger screen. Echoing out beyond that, the facial recognition deployed by governments, at shopping centres, by AI, tracking our movements, reading our text messages. Watching a performance distilled through the logic of two cameras with live-feeds to mounted screen, we are at once complicit in an involuntary act of surveillance. It doesn’t necessarily register, and why would it? So normalised are these intermediaries, with which we examine and interpret change. Screens are ubiquitous, omnivorous, glowing. They are used to frame and distill meaning, and yet when it comes to mapping a body in movement, they cannot capture the whole.